I had the image of a well written post, with satisfying recipes for the end of this week, but alas time, energy and 2 little toddlers put an end to that vision.

However, I do have a quick side dish/lunch salad. Not much I know but here it is..

It has been declared by the UN to be International Year of Quinoa 2013. An initiative to bring attention to the wondrous grain and to the people who farm it (more on that to come but if you can’t wait check out the info here). 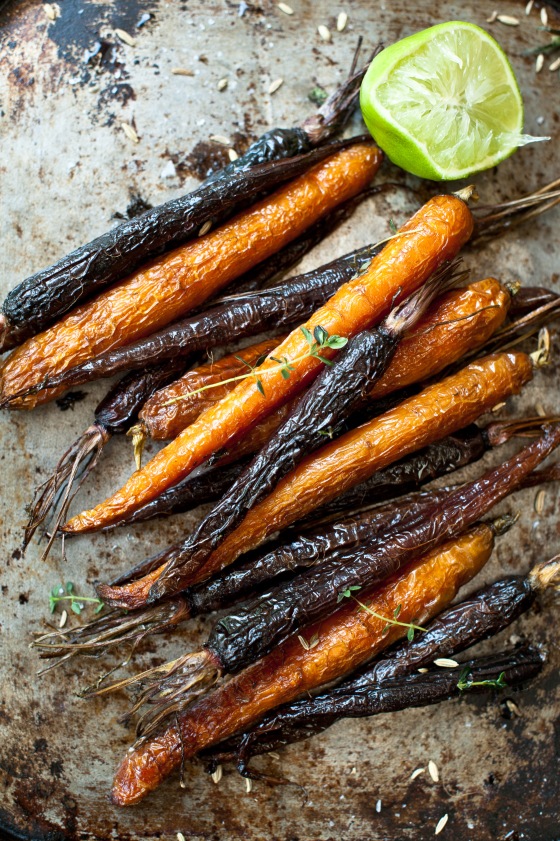 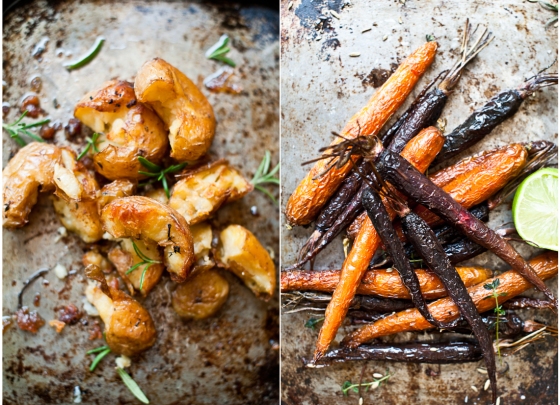 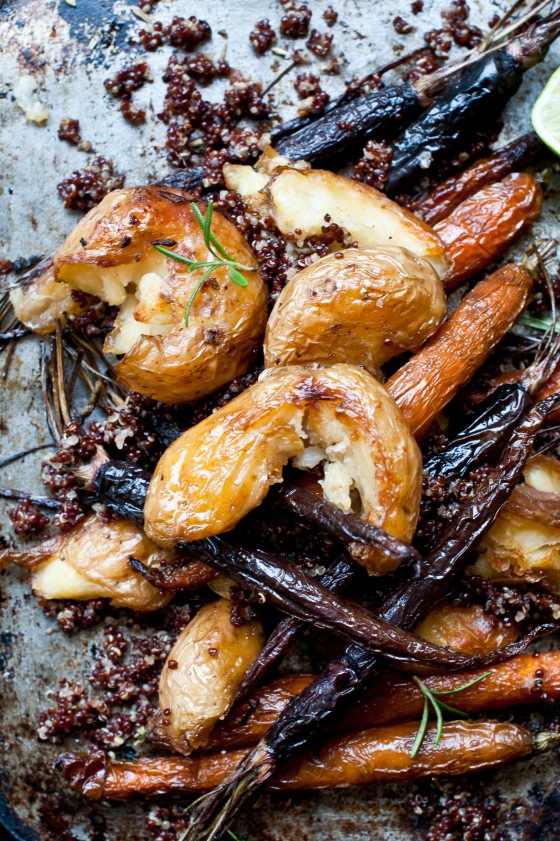 There is something really welcoming about this dish. Homely perhaps? Colourful? Not to mention easy and delicious. Serve it with a roast, with a steak, a piece of salmon. Add some ashed goats cheese, baby spinach and call it lunch.

Roasted Carrot, Potato and Quinoa side

Wash your potatoes but don’t peel.

Place into a saucepan and cover with cool water. Place over high heat and bring to the boil. Cook potatoes for 20 minutes or until they are cooked through and soft, but not falling apart (usually when the skins begin to crack).

Drain from water, place into a heat proof dish or roasting pan. Squash with your fingers or tongs to smash apart a little.

Drizzle with olive oil and season with salt and pepper. Toss to cover evenly with the oil.

Place into the preheated oven and cook until crispy and browned. (I usually go and give them a shake around once or twice whilst cooking so all surfaces brown up) Around 30 -40 mins.

Meanwhile wash the carrots well but don’t peel them. Place in an oven proof dish or roasting tray drizzle with olive oil and apple cider vinegar, toss until all are coated evenly. Spread out in a single layer.

Place in the preheated oven and roast for 30mins or until tender and just starting to shrivel.

In a saucepan over medium heat place Quinoa and stock and bring to the boil. Once boiling reduce heat to low and place a lid on. Cook for 15 mins or until all liquid is absorbed.

Once cooked remove lid and allow to settle and dry a little, then fluff with a fork or spoon.

When carrots are cooked and still hot, sprinkle with fennel seeds, thyme and squeeze the lime juice over to meld and heat.

When the potatoes are still hot, add the rosemary, and season to taste.

Combine the quinoa, potato, and carrot onto a platter with all the juice and oil from cooking.

Notes: I have written the recipe to roast the veggies separate, you don’t have to, I have just found that there is a better result with the potatoes if they are separated.

Dutch carrots can be found at most major supermarkets and good green grocers. If you can’t find purple (although they are becoming increasingly available) ask if they can get it on order or check out your local farmers market, or grab a 2 liter soft drink bottle, some seeds, some dirt and grow your own (check out pinterest).

If you don’t have chicken stock on hand you can use water to cook the quinoa, but boost the flavour by adding some herbage, a baby leave, lemon rind, add something to the liquid to carry some sort of flavour into the grain.

Also I have used red quinoa here, but if you can’t get it use white. Red quinoa can be purchased from major supermarkets, health food shops and online.